MBA's all school read is The Power of One, by Bryce Courtenay.

Enjoy The Power of One? Try these! All available at the bigredlibrary. 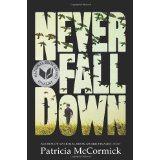 Never Fall Down by Patricia McCormick

This National Book Award nominee from two-time finalist Patricia McCormick is the unforgettable story of Arn Chorn-Pond, who defied the odds to survive the Cambodian genocide of 1975-1979 and the labor camps of the Khmer Rouge.

Based on the true story of Cambodian advocate Arn Chorn-Pond, and authentically told from his point of view as a young boy, this is an achingly raw and powerful historical novel about a child of war who becomes a man of peace. It includes an author's note and acknowledgments from Arn Chorn-Pond himself.

When soldiers arrive in his hometown, Arn is just a normal little boy. But after the soldiers march the entire population into the countryside, his life is changed forever.

Arn is separated from his family and assigned to a labor camp: working in the rice paddies under a blazing sun, he sees the other children dying before his eyes. One day, the soldiers ask if any of the kids can play an instrument. Arn's never played a note in his life, but he volunteers.

This decision will save his life, but it will pull him into the very center of what we know today as the Killing Fields. And just as the country is about to be liberated, Arn is handed a gun and forced to become a soldier. 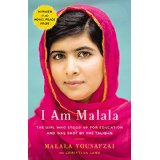 I am Malala by Malala Yousafzai

A MEMOIR BY THE YOUNGEST RECIPIENT OF THE NOBEL PEACE PRIZE

"I come from a country that was created at midnight. When I almost died it was just after midday."

When the Taliban took control of the Swat Valley in Pakistan, one girl spoke out. Malala Yousafzai refused to be silenced and fought for her right to an education.

On Tuesday, October 9, 2012, when she was fifteen, she almost paid the ultimate price. She was shot in the head at point-blank range while riding the bus home from school, and few expected her to survive.

Instead, Malala's miraculous recovery has taken her on an extraordinary journey from a remote valley in northern Pakistan to the halls of the United Nations in New York. At sixteen, she became a global symbol of peaceful protest and the youngest nominee ever for the Nobel Peace Prize.

I AM MALALA is the remarkable tale of a family uprooted by global terrorism, of the fight for girls' education, of a father who, himself a school owner, championed and encouraged his daughter to write and attend school, and of brave parents who have a fierce love for their daughter in a society that prizes sons. 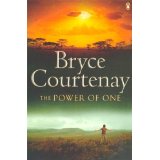 There are two versions of this book:  the full version, and the young reader's condensed edition.  The young reader's edition is only the first half of the book, which concerns the main character's childhood.  The full version includes the story of the second half of his life, his story as an adult who uses the world of boxing to overcome obstacles.

Please read the full version.  Note:  any Kindle version or other digital/ebook version is NOT the entire book.  The full book is only available in audio or print format.

1. Buy Local - go to Parnassus Books and support your local independent bookstore by buying a copy there.

2. Order from online retailers and get it shipped to your house.

3. Go to your local public library to check out the book or audiobook.

The MBA Library has a number of used copies for the faculty as well as two audiobooks.