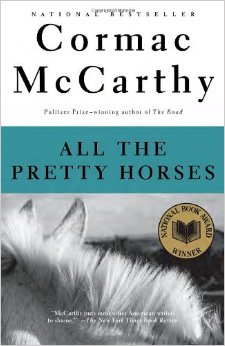 In All the Pretty Horses, Cormac McCarthy begins his Border Trilogy with a coming of age tale that is a departure from the bizarre richness and mysterious violence of his early novels, yet in many ways preserves the mystery and the richness in a more understated form. 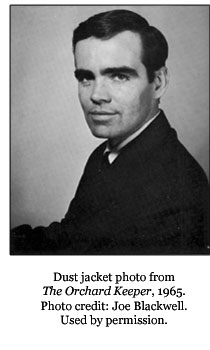 From the official website of the Cormac McCarthy society

Cormac McCarthy was born in Rhode Island on July 20, 1933. He is the third of six children (the eldest son) born to Charles Joseph and Gladys Christina McGrail McCarthy (he has two brothers and three sisters). Originally named Charles (after his father), he renamed himself Cormac after the Irish King (another source says that McCarthy’s family was responsible for legally changing his name to the Gaelic equivalent of “son of Charles”).

In 1937, when he was four, the family moved to Knoxville, and his father became a lawyer for the Tennessee Valley Authority (legal staff 1934-67; chief counsel 1958-67). In 1967, the McCarthys moved from Knoxville to Washington, D.C., where Charles was the principal attorney in a law firm until his retirement.

Cormac was raised Roman Catholic. He attended Catholic High School in Knoxville, then went to the University of Tennessee in 1951-52. His major: liberal arts. McCarthy joined the U.S. Air Force in 1953; he served four years, spending two of them stationed in Alaska, where he hosted a radio show.

None of McCarthy's previous works, not even the award-winning The Orchard Keeper (1965) or the much-admired Blood Meridian (1985), quite prepares the reader for the singular achievement of this first installment in the projected Border Trilogy